For those who have followed my news feed for sometime, global financial issues aren’t anything new. But this article, in light of what is happening here in 2022 concerning Russia and Ukraine, is a good recap of global trends that have brought us to this point. That includes justified criticism of the US’s abuse of the dollar as the current global reserve currency. Very insightful, for the bewildered, to the background of ongoing international conflict.

While #AmericanEvangelicalism skates along largely oblivious – or perhaps in resignation – to the uncontainable collapse of their careless, morally bankrupt, Disneyland culture and the hirelings in American pulpits furtively assuage the frightened sheep and the ambivalent tares in their flocks with notions of “revival” and escape from the repercussions of their careless living, prophetic history moves forward.

Recent weeks and seemingly disparate events brings the Middle East closer to WWIII – and fulfillment (my Preterist friend’s varied insistence this being the war at the end of the thousand year reign aside) of the Ezekiel 38-39 war scenario. The recent Israeli Air Force (IDF) strikes in the area of Palmyra, Syria, have brought the Israelis extremely close to Russian assets deployed in the area to support the Syrian Army and their ally Bashar Assad. The March bombing run and peripheral events was a bit much for Russia.

It is important to note that the Jewish nation is very up front about their security intentions, especially as they seek to maintain the balance of power in preventing “game changer” arms falling into the hands of their enemies, like Hezb’Allah and Hamas in Gaza. Netanyahu reiterated this again in this situation.

“When we identify attempts to transfer advanced weapons to Hezbollah — when we have the intel and the operational capability — we act to prevent it. That’s how we’ve acted and how we will continue to act… and everyone needs to take this into account,” Netanyahu said on Friday.

Yet, the Russians seem to think that their presence in the area and supporting Assad in his civil war exempts them from the inevitable collateral damage when Israel moves on a security threat – even going so far to say that these “games” are over.

Or what? They’ll invade Israel? Under the pretext of upending this lawless “rogue regime” and partnered with a “coalition of the willing?”

Read the Bible Vlad. The casualty counts are going to be apocalyptic when you finally do. It’s really going to take the wind out of your sails, along with your Islamist allies. And it isn’t going to be the Israelis bringing the pain….

Read More… ‘Game is over’ as Moscow summons Israeli ambassador

In the midst of dozen of other factors in play in the Middle East right now, the continuing partnership of Russia and Iran continues apace.

While the Western world struggles with myriad issues at home, the major players in the post-Western led Middle East – and Israel – continue to fill in the vacuum left in the wake of America’s withdrawal from the region under the previous administration.

Or, it could make enemies out of “friends.”

A world reflexively hostile to the Jews and the Jewish nation Israel would not hesitate at all to justify an aggressive action against Israel if they started disrupting economic realities that prevail at the present time. Especially Russia. The European energy marketplace is their backyard and one of Putins’ main sources of leverage over the EU and NATO.

The discovery of these fields in recent years will prove to be a major issue in the future of energy and the geo-politics of the region.

Read More… For Israel, energy boom could make friends out of enemies 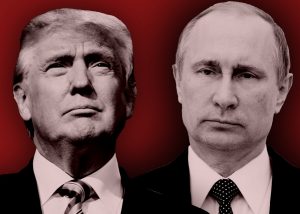 Daniel Cloud, lecturer at Princeton University Center for Human Values/Humanities Council, posits an interesting thesis at a blog post at Zero Hedge, after president elect Trump’s call to the leader of Taiwan. In “Trump’s Shot Across China’s Bow,” he articulates various times in history when miscommunications between nations have led to wars that would have otherwise been, possibly, prevented. The current “bromance” between Trump and Putin has caused some angst in national security and global circles. This is understandable.

Setting aside the more complex issues of the recent energy and currency wars based in the decades long reign of the petro-dollar and the BRIC’s nations attempts to unseat that global financial hegemony, it is helpful to shed more light on what is more obvious to the casual observer.

Both Trump and Clinton in the 2016 presidential debates made their foreign policy priorities clear. Hillary Clinton was very clear she was going to challenge Putin and his military adventurism (whether in the Ukraine and Crimea or the Middle East) by insisting on a “no fly” zone over Syria.  This, a notion long time ago hobbled by hers and the outgoing Obama administration’s failure to act years ago in that country, would have put American NAVY and air force fighter jockeys in immediate direct conflict with the Russian and Syrian air forces. There already is a no-fly zone in Syria. It’s enforced by Russian air power, backed up by their S-300 air defense missile systems. It would have been WWIII.

Trump’s foreign policy priorities are China and the South China sea. He was very adamant about it in the debates, and it is even more clear in his foreign policy priorities listed on his web site. He has stated he supports Russia destroying ISIS, and we should let them do it.  Daniel Cloud says that Trump’s phone call to Taiwanese President Tsai Ing-wen was a clear warning shot across China’s bow concerning any repercussions on moves they might make in the future against that country, and how, historically, not doing so – being clear on our intentions and potential responses to scenarios like this – can only invite disaster.  He is right, and I agree with other analysts who presented the same theory.  Saddam Hussein’s invasion of Kuwait is a perfect example. I remember that well.

Here’s the wrinkle: while Team Trump is gearing up to challenge “Chy-Na!” and their expansionism in the South China sea and currency manipulation in the years ahead, forecasting his position to the Chinese, he’s failing to maintain the same deterrence against Russia and her allies in the immediate future as they seek to expand their influence throughout the Middle East.

10 Thus saith the Lord God; It shall also come to pass, that at the same time shall things come into thy mind, and thou shalt think an evil thought:

11 And thou shalt say, I will go up to the land of unwalled villages; I will go to them that are at rest, that dwell safely, all of them dwelling without walls, and having neither bars nor gates… (Ezekial 38:10-11)

The inevitable target in that scenario? The Bible teaches explicitly in Ezekial 38-39 that “in the latter days” a coalition from the North (Russia is now dug in, in Syria) will invade the “hills of Israel.” With the radical changes nationally and globally in energy and the currency wars and the withdrawal of America from the Middle East as a priority because of our energy independence, Israel is in a precarious position, more than any time in their history.

I understand perfectly Trump has vocalized unequivocal support for the Jewish nation. Nonetheless, dealing with an individual like Putin who has dominated national news headlines for a longtime now because of his aggressiveness and shrewdness, and the extremely morally ambiguous and compromised Trump, who as a businessman views everything on a cost/benefit plane, the idea of the U.S. rushing in to defend Israel in an Ezekial 38-39 scenario is unfortunately based largely on a lot of sentimentalism and severely misplaced hope. Hope in Trump, not the Holy One of Israel.

We are going to find out.