Sure enough, I saw it pop up first on Twitter, and the vultures are circling. The idea that professing Christians are obligated to “tithe” their stimulus checks to the ministry – many commentators suggesting from ten percent to even one hundred percent. A cursory reading 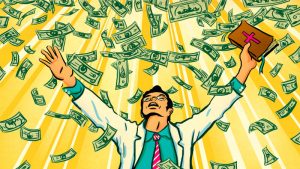 sees the faithful parroting the mangled theology of the American prosperity gospel that has infected the culture for decades, evidence of how many have bought into this lie.

The 2020 stimulus checks were issued by the US government for one purpose – that laid off and furloughed workers might possibly weather for a while the economic downturn due to the quarantine the same government decreed in a furtive attempt to manage the Covid-19 pandemic. As during the 2008 banking/real estate market crash that financially decimated so many lives, a sovereign God permitted this as a corrective measure on a Church polluted by the prosperity and materialism of a our country and era.  Likewise, the Covid-19 pandemic – plagues being a Biblical sign of God’s judgment – is a corrective measure as well.  This pandemic did not happen outside of the Lord’s sovereign will, but has a purpose.  Very, very few are talking about that.

So, should Christian people “tithe” money from their stimulus check?  The Bible teaches first that men should “provide for their families.” I guarantee

you, if you have qualified for a stimulus payment, you are square in the demographic that is most vulnerable in our fractured, crippled economy.  That money is for groceries and rent and providing for your family. It is for, perhaps, car repairs, so you are prepared to go back to work, or paying off your utilities.

It is NOT to continue to underwrite the thoroughly spiritually and morally bankrupt American Evangelical Industrial Complex; the “mega church” model that has grown like a cancer across the country.  Some of these “celebrity” preachers are worth millions, having lived like parasites off the 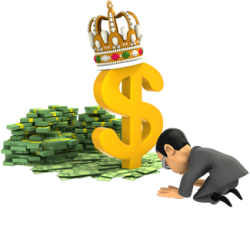 naive generosity of the true Church for generations, or unfortunately the unrepented of greed of the same.  It is lost on the undiscerning that the two major catastrophes of recent years to so negatively impact American culture and visible Christianity – the 2008 market crash and the Covid-19 pandemic – have both directly targeted the biggest idol in the modern day American Church – the almighty dollar.

The simple guidelines for New Testament giving are clear. It is what Christianity has become in America that has perverted the simplicity of it.

Statistics show that an insane number of people are in debt, most living paycheck to paycheck, and few with even a small savings to fall back on in the event of an emergency. Acknowledging many reasons for the cost of living in some states and areas or circumstances beyond an individual’s control, a lot of this is still because of simple gross mismanagement of personal finances.  Giving ones hard earned money to these “Christian” shysters and extortionists who mainly appeal to people’s greed is first of all, unbiblical, it’s also irresponsible.  The Lord does not need your money to “further the ministry.”  These wolves in sheep’s clothing need it to underwrite their exorbitant, posh lifestyles and bloated corporate budgets, and that at the expense of the naive, undiscerning, and ill-informed.

Further reading: Why Tithing is Biblical but it’s Not Christian 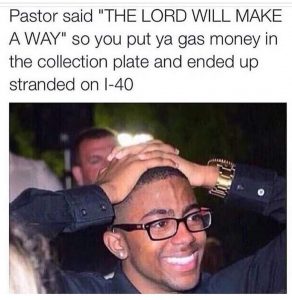 Well, a few others and I called this one well. Now the upper eschelons of the Navy, after the posturing of the Pentagon brass and their civilian cheerleaders egging them on, in the wake of the removal of USS Roosevelt Capt. Brett Crozier, have come to the conclusion he should be reinstated to his former command. It was clear from the very start the morally flaccid in the halls of the Pentagon (modeled well by then acting secretary of the Navy Thomas Modly – what a weasel), were all covering their own butts and personal mismanagement and cared nothing for the truth – or the health and welfare of the USS Roosevelt crew.

Capt. Crozier, in a very difficult situation after having to deal with these useless career bureacrats, did what he had to do to save his crew in the face of the Covid-19 outbreak on the ship. He may never receive any recognition professionally for his act of valor, but the respect and admiration of many people like me, and active duty NAVY staff throughout the fleet, is no doubt worth more in the long run.

Get that ship squared away and back out on the water! 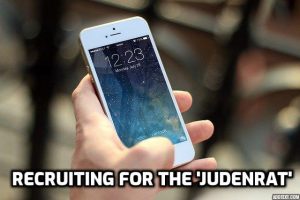 So, the latest totalitarian nuisance to inflict itself on the hapless population struggling to deal with the COVID-19 state of affairs comes out of Riverside County, California. This, on top of the quarantine, politicians and “experts” with their endless outrageous decisions and predictions, medical institutions miss-classifying any and all deaths as virus related, and a malevolent mass media abandoning any objectivity while continually sensationalizing these skewed numbers to generate internet traffic, now there is the option for nosey busybodies and the vindictive to rat out anyone they feel is violating the arbitrary mandates of the state health authorities.

Thus far, thankfully, the response to this from the majority sane trying to maintain a sense of proportionality in the midst of this cultural lunacy is one of complete rejection. Nevertheless, there will be the few who sign on to the public health officer for Riverside County recruiting for the new ‘Judenrat‘ and feel they are doing some warped civic duty.  The shredding of American cultural norms continues apace.

I would encourage my fellow Americans, and especially Riverside County residents, to continue to resist this. 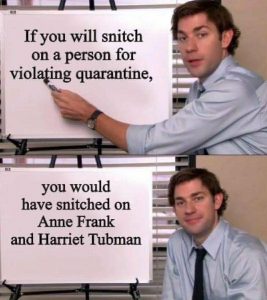 Steve Berman at The Resurgent gives some much needed insight into the sacking of Captain Brett Crozier of the USS Roosevelt after a letter about the coronavirus outbreak onboard was “leaked” (the carrier is currently berthed in Guam). Initial reports from the Navy brass was “…Crozier was dismissed due to loss of confidence and for not using his chain of command to make Navy leaders aware of his concerns about the coronavirus outbreak on the ship, acting Navy Secretary Thomas Modly announced at the Pentagon.”

BREAKING: US Navy sailors on aircraft carrier in Guam break out in cheers thanking Captain Crozier and chanting his name after he was fired from his positing for protecting them pic.twitter.com/UPmaqnmApq

Immediate blowback throughout the general Navy population and Veterans nationally and globally was pretty striking. Social media postings are making the rounds of a rousing send off of Capt. Crozier by the crew as he left the ship for the last time. A petition to reinstate him has already been launched.

From what I can garner thus far, Crozier did in fact make the effort to alert the upper echelons of the Navy of the quickly evolving scenario on board the tightly packed ship, but was quickly hobbled by the red tape the bureaucracy is notorious for, and he intuitively sensed the immediate danger to his sailors. So he, figuratively, “jumped on the grenade” to save his crew.

For those familiar with American pop culture, this probable scenario was clearly portrayed in the movie “Behind Enemy Lines” starring Owen Wilson and Gene Hackman. In the movie, Gene Hackman, as the captain of an America carrier, sacrifices his career in defiance of NATO directives to initiate a rescue mission to save his downed pilot, played by Owen Wilson. Funny how reality mirrors fiction, or vice versa.

If it does, indeed, come out that this was how the scenario went down, I think Navy Secretary Thomas Modly should be immediately sacked, for many of the valid reasons Berman states in his article. The sort of posturing here by Secretary Modly and the Navy higher ups, to basically “save face,” is caustic and undermines the confidence in their questionable leadership and judgment by our brave, forward deployed sailors in these perilous times.

UPDATE: Mark Alexander Milley, a United States Army general and the 20th Chairman of the Joint Chiefs of Staff, is making the rounds on Twitter with the “official narrative” of the Pentagon for the sacking of USS Roosevelt Capt. Cozier. Predictably, those with the analytical thinking skills of children (and a few with clear “daddy” issues in their slobbering endorsement of Miller) fall in line.

Riddle me this, then. Probably more people have walked in space then have skippered a US nuclear aircraft carrier. It should be intuitive to even the most dull that for these men to make it to “the chair” have to be some of the most trustworthy, tested, and dependable individuals (mind, body, and spirit) to exist in the nation. Yet, we are to believe that Capt. Crozier succumbed to the laundry list of command failures propagated by the Pentagon brass in the wake of the blowback generated by their decision concerning Crozier?

Oh, please. What a crock. The whole thing stinks to high heaven, and Capt. Crozier is getting thrown under the bus to cover a lot of butts.